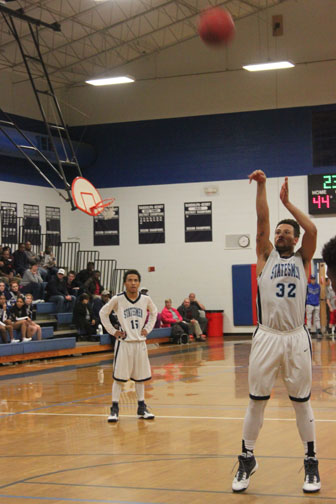 Randolph-Henry High School’s Tremaine Pugh, right, fires up a free throw as Jalin Watson looks on. Pugh led the team in scoring last year and is back for his junior season.

The Randolph-Henry High School varsity boys basketball team was competitive last season, and Head Coach James Graves sees the potential for it to do big things this season.

“I think that we will make a run at the district title,” Graves said. “It just depends on how well the kids gel, but I think we have the potential to make a run. Whether we do it or not, I don’t know. It was like last year; we were playing to get to this year, and this year, we’re playing to next year, because we’ll be heavy (with) seniors next year. So, we’ve kind of got two years to try to make that run.”

Graves, who returned to the Statesmen last season, had prior experience engineering successful Randolph-Henry squads.

“The last year I coached was 2006-07, and we were 18-6 that year,” he said, as the Statesmen won the James River District during that campaign. “So, I’d been out of it, and they wanted me to come back in the program, and I decided to do so. So, we kind of overhauled stuff, but we were very competitive.”

The Statesmen finished last season with a record of 3-17.

“The record is not indicative of the games that we played,” Graves said. “We were ahead of Bluestone (High School) both times in the fourth quarter. We lost a lot of games by five or six points. We lost to Prince Edward (County High School) in overtime.”

In their first game of the Courthouse Conference 37 tournament, the Statesmen defeated Chatham High School before falling to Dan River High School in the next round.

“We went really young,” Graves said. “I only had three seniors.”

A member of the Statesmen varsity squad since his freshman year, Pugh led the team in scoring last year and looks poised to continue in a similar role this season, putting up 20 points in a recent scrimmage against William Campbell High School that R-H won by 10 points.

“Tremaine can play any position,” Graves said. “I play him at three and four for the most part.”

Pugh, Boyd and Pettus are expected to be leaders. Additional key contributors will be junior center Billy Brantley Jr., junior center Kevon Boyd and senior forward Jesse Redd, all three of whom help showcase the fact that the Statesmen have good size this year in terms of height.

The Statesmen move this season to Region 2A East and with that transition they leave Conference 37 and join Conference 34. Their conference mates include Amelia County, Bluestone, Brunswick, Goochland, Greensville County, Nottoway and Prince Edward County high schools.

Randolph-Henry begins its season Monday when it visits Gretna High School with a 7 p.m. tipoff.