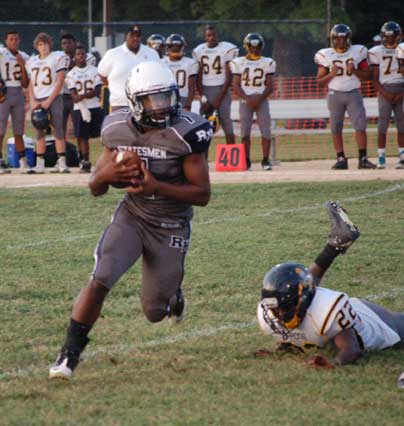 “I’m pretty pleased,” Statesmen Head Coach Mark McPherson said of his team’s performance. “I feel like we could have done better, but it was a strange kind of a game.”

Randolph-Henry did not get to play much offense, finishing with only 27 offensive plays, when McPherson would have liked to have had 60, helping keep the ball away from the potent Nottoway offense.

“Sometimes your best defense is a good offense,” he said.

The Statesmen put points on the board, but many of them came through big special teams plays that were followed promptly by a kickoff to the Cougars.

Though the plays did not eat up much time, McPherson said, “I loved the way we scored on special teams.”

All of Randolph-Henry’s points were scored by senior Chris Powell. He had 16 carries for 73 yards, including a 1-yard touchdown run. He also ran for a 2-point converison.

On special teams, he had kickoff returns of 81 and 80 yards for touchdowns.

On defense, he returned a fumble 31 yards for a score.

“He did so many things for us this year,” McPherson said. “He doesn’t play within the scheme sometimes, but he ends up doing a lot of good things anyway, and you’ve got to have him on the field.”

Powell rushed for 1,022 yards and 10 touchdowns this year.

Randolph-Henry finished the season with a record of 2-8.

“It was such a very challenging season inasmuch as I feel like we underacheived,” McPherson said. “I feel like we should have done better.”

Some key players were lost during the course of the season due to injuries, though McPherson noted that most teams can say that.

He hopes for improved facilities in the future and hard work from players in the offseason, including the 15 returning seniors expected on the roster.

The Randolph-Henry High School varsity football team has been on a hot streak in recent weeks, but it was not... read more