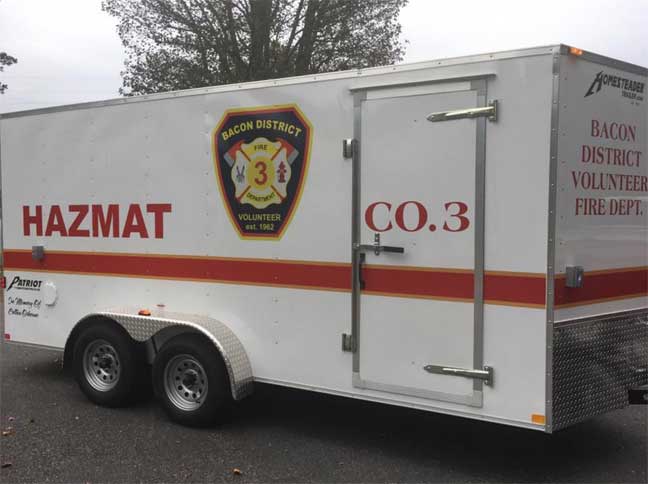 This hazardous materials, or HazMat, trailer should be put into service in the next week to week and a half at the Bacon District Volunteer Fire Department. Purchased two years ago, it is almost ready for official use. One of the latest touches is lettering near the front side of the trailer reading “In Memory of Colton Osborne,” an 18-year-old firefighter who died in an ATV accident earlier this year.

The Bacon District Volunteer Fire Department (BDVFD) is almost ready to officially put a hazardous materials, or HazMat, trailer it bought two years ago into service. Since purchasing the trailer, the department has been raising money to equip it, BDVFD Chief Wade Stembridge said.

One of the most recent touches involved adding the lettering for the following words on the trailer: “In Memory of Colton Osborne.”

Osborne died in late August in an ATV accident, which was followed immediately by another ATV crash at the same location, injuring another rider.

In a Facebook message exchange with The Charlotte Gazette, his mother, Teresa Osborne, said she wanted to thank the fire department and everyone who made donations in her son’s memory to make the trailer possible.

“Colton loved the fire department and it is an honor to us for them to dedicate this trailer in memory of Colton,” Teresa Osborne said. “Colton will live in the hearts of everyone around here and seeing this trailer reminds me of the love everyone had for Colton.”

Stembridge said there are two or three more items to order and install, and then an inspection to pass.

“We’re taking it one step at a time,” he said. “We hope they come in next week. We should be able to put it in service in about another week, week and a half. We could use it now, if we had to — there’s no law against it — but we’re trying to do the required things. It (the lettering) is kind of like an advertisement.”

Stembridge said other departments, and Charlotte County itself, have HazMat trailers.

Like Teresa Osborne, he said he is grateful for the financial support the department’s received, especially for the trailer. Stembridge also said he approached the Osbornes after Colton’s death about what to do with the money being raised in his memory.

“They asked me what I’d do and I told them about the trailer,” Stembridge said. “We wanted to show where the people’s money went.”