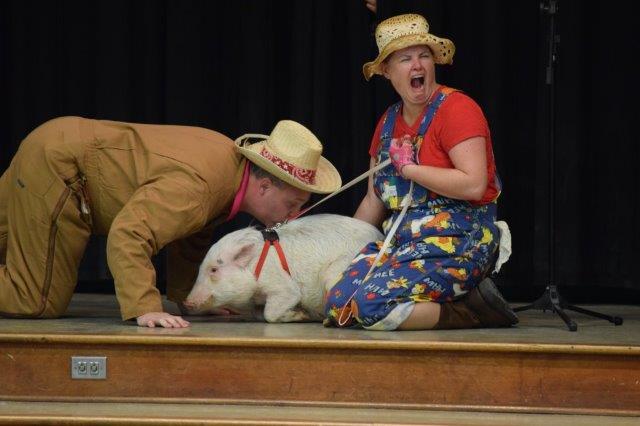 What began as a small gesture of kindness and concern soon became a battle of the classes. It was the best of battles as Eureka Elementary School students, parents and staff stepped up to the challenge presented to the school by fifth-grade teacher Christy Shook.

For five days, students brought in change for a “Piggy Bank War” to donate to the victims for the recent tornado in the Appomattox.

Piggy banks were weighed each day and classes became more and more excited waiting to see whose bank weighed most.

At the end of the week, Eureka’s school piggy bank weighed a whopping 1,974.70 pounds.

Students were promised to see Principal Brian Hamilton kiss a real pig in honor of their work filling up all their piggy banks if they collected 100 pounds.

The students met that goal on the first day, so Alison Gibbs volunteered to kiss the pig if they brought in 400 more pounds.

The students beat that too. So, then the students were challenged to meeting the goal of 800 pounds of pennies and they could vote for the teacher of their choice to kiss the pig.

They met that too and the school was buzzing over who would win the vote and wondering just how much money 1,974.70 pounds was.

The five finalists from the students’ votes were Kathleen Braun, Sandy Flynn, Janice Guill, Sylvia Jordan and Christy Shook. With 107 votes, Braun won the honor of kissing the pig.

A pig-calling contest even took place with Alison Freeland, Kelli Harding and Carmen Tucker. Harding was declared the winner and her prize was a chance to kiss the pig. After all, she did call the piggy, she should kiss it.