Urging the board to reconsider 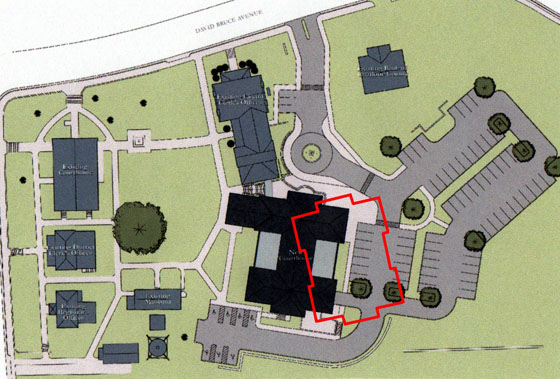 A map showing the footprint of the new courthouse addition to the Circuit Court Clerk’s office, as proposed by the county’s architects, in dark gray. The lined shape, at bottom right, shows the suggested approximate location of a new courthouse, as recommended by the Department of Historic Resources, the Charlotte Court House Town Council and others.

Sports fans keep up with the players, coaches, stats and rankings in the sports they follow. If you are not a fan, you probably don’t know the names of many players and coaches, much less what they have accomplished.

In the fields of architectural history and historic preservation, Richard Wilson, Carl Lounsbury and Julie Lagan might be compared to LeBron James, Ken Griffey Jr. and Joe Theismann. They are highly accomplished and “know their stuff.”

Richard Wilson chairs the Department of Architectural History at the University of Virginia School of Architecture. Carl Lounsbury is senior architectural historian, Colonial Williamsburg Foundation. Julie Langan is the director, Virginia Department of Historic Resources and the state historic preservation officer. Wilson, Lounsbury, Langan are among many experts who agree that the Charlotte County Courthouse Square is a nationally significant historic site. And they agree that current plans for new courthouse would do great harm to this historic site. The Supervisors propose a new three-story courthouse that would be attached to the Circuit Court Clerk’s Office.

The Department of Historic Resources and other experts recommend separating the new courthouse from the Clerk’s Office, situating it further east to take advantage of the slope so the new building can have a lower profile.  This would minimize the harmful impact on the Courthouse Square. The Charlotte Court House Town Council unanimously adopted a resolution that requests a separate building. The separate building would occupy the same two tax parcels as the addition proposed by the county. Its location is “way up” on the slope, not “in the bottom.” In fact, the footprint for the separate building would overlap part of the footprint for the proposed addition.

I urge the supervisors to heed the advice of experts and the recommendation of the Charlotte Court House Town Council.

More Letters to the Editor

Letter to the Editor — A mission to provide warmth

Letter to the Editor — Be careful on Halloween

Letter to the Editor — What’s your official title?

Letter to the Editor — Court, Republicans move to take away rights