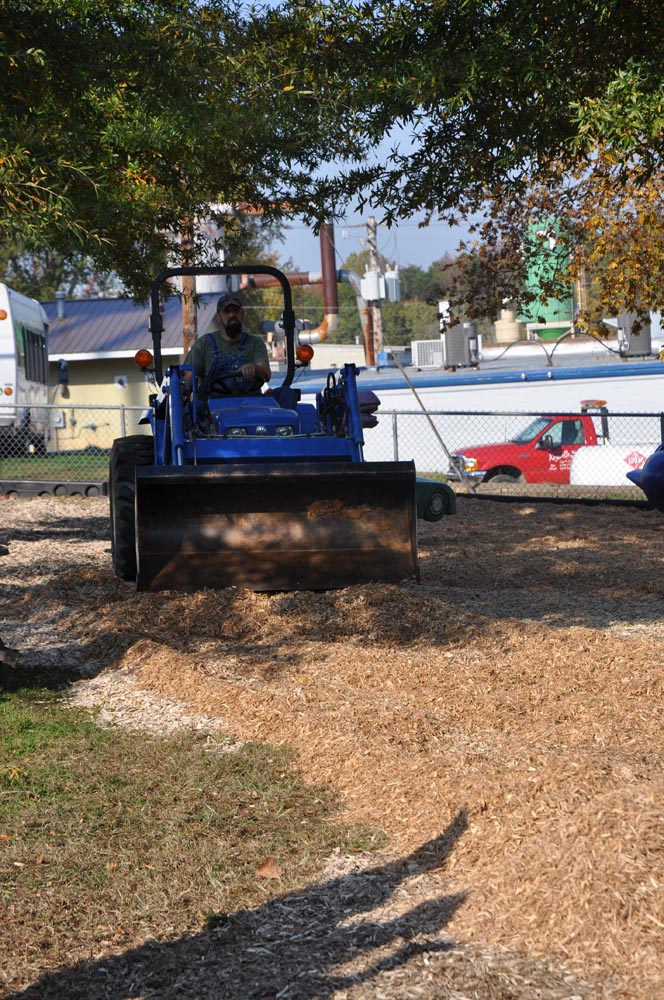 Last Friday, local volunteers and members of Team Shentel arrived in Keysville at Tower Park Playground bright and early as part of Shentel’s Community Connections program initiative to make updates to the park.

Nine Shentel employees and local community members worked side-by-side to complete the project. Marketing Supervisor of Shentel Cindy Rinker said, “this October, we chose six community parks in our footprint to renovate. “Shentel purchased two tractor-trailer loads of mulch for the Tower Park playground in Keysville and spent most of the day on Friday spreading that mulch.”

According to a press release from Shentel, an estimated total of $15,000 was donated to improvements for Tower Park. Improvements included the professional re-painting and tightening of the existing playground equipment, new mulch to cover the playground area and the addition of a new playground piece to be installed in spring. Rinker said the new piece of equipment would likely be a seesaw.

“Since the park’s establishment in 2002, it has become a vital resource for the local community,” stated the release. Co-founder of Tower Park Playground Rhonda Locke Benn said, “We were thrilled to be recipients of a philanthropic grant from Shentel. Not only do we get to resurface the playground with 200-cubic-yards of woodchips, a new piece of equipment, and power washing and refreshing the old equipment but we also get the manpower from the workers of Shentel,” she said.

Located on Main Street, Tower Park is situated in the heart of Keysville. The outdoor playground features a variety of equipment for youth to enjoy. “We were excited to spend the day working in Keysville,” said Willy Pirtle, senior vice-president of marketing and sales at Shentel. “Public parks are the heart of their communities,” he said.

Established in 1902, Shentel is a provider of high-speed Internet, cable television and phone.

School Board reacts to denied proposal